I have been using Nexus 5 for about a week, I think that this is enough to make some conclusions and share my experience with you. At first I just want to say that this device is awesome for my needs. As I said I have it for a week and I'm glad that I bought it. This is not my first Nexus device, but my first Nexus phone. Before I had Nexus 7 2012 and Nexus 7 2013 models before. Before Nexus 5 I used Nokia Lumia 920 with Windows Phone 8 as my primary phone, so you will find some notes about some features which I compare to Lumia phone.

This one of the most important things people want to know about this device. At least a lot of them speak or ask about this. This device has 2300 mAh battery. Lumia 920 has 2000mAh, so for me this is already improvement in numbers.

Before I will give you raw numbers for how long I can use this phone, let me first tell you how I use it. On Nexus 5 I sync two emails: gmail and exchange, also I sync Twitter, HipChat, Facebook, I have Flickr upload turned always on (with help of Flickr Uploader), Google Now also is always on.

My daily usage is simple: ~1 hour of heavy usage at morning (Feedly, Chrome, Facebook and Twitter, of course with pictures, sometimes with videos) and at the same time I stream songs from Google Music, after this I have 75-80% battery. In working hours sometimes I check emails, can read some mentions in twitter. By the end of working day I have around 55-65%. On way home I use phone for about one hour, at this time mostly for songs streaming and reading something from Pocket. At home I have 40-50%. I used only cellular data,very rarely Wi-Fi. In screenshot on right you will find that Wi-Fi takes 12% of battery, but this is because Nexus continue to use it for geo-location even if your Wi-Fi is turned off. I will try to turn this feature off for next couple of days and see how this can affect battery life.

Sometimes it can be better, sometimes worse. For example right after I bought this phone in first two days I touched my phone so often, so in first day at 1pm phone was almost dead. Yesterday I made couple Skype calls at morning and at the end at home phone had 30% battery.

Couple things I tweaked: turned off "Ok, Google" feature, because I've read somewhere that it can use battery a lot, and second thing: I always Sing Off from Skype, I feel that it also uses battery a lot and I don't like to see all messages from Skype on all devices I have when I chat on desktop version. 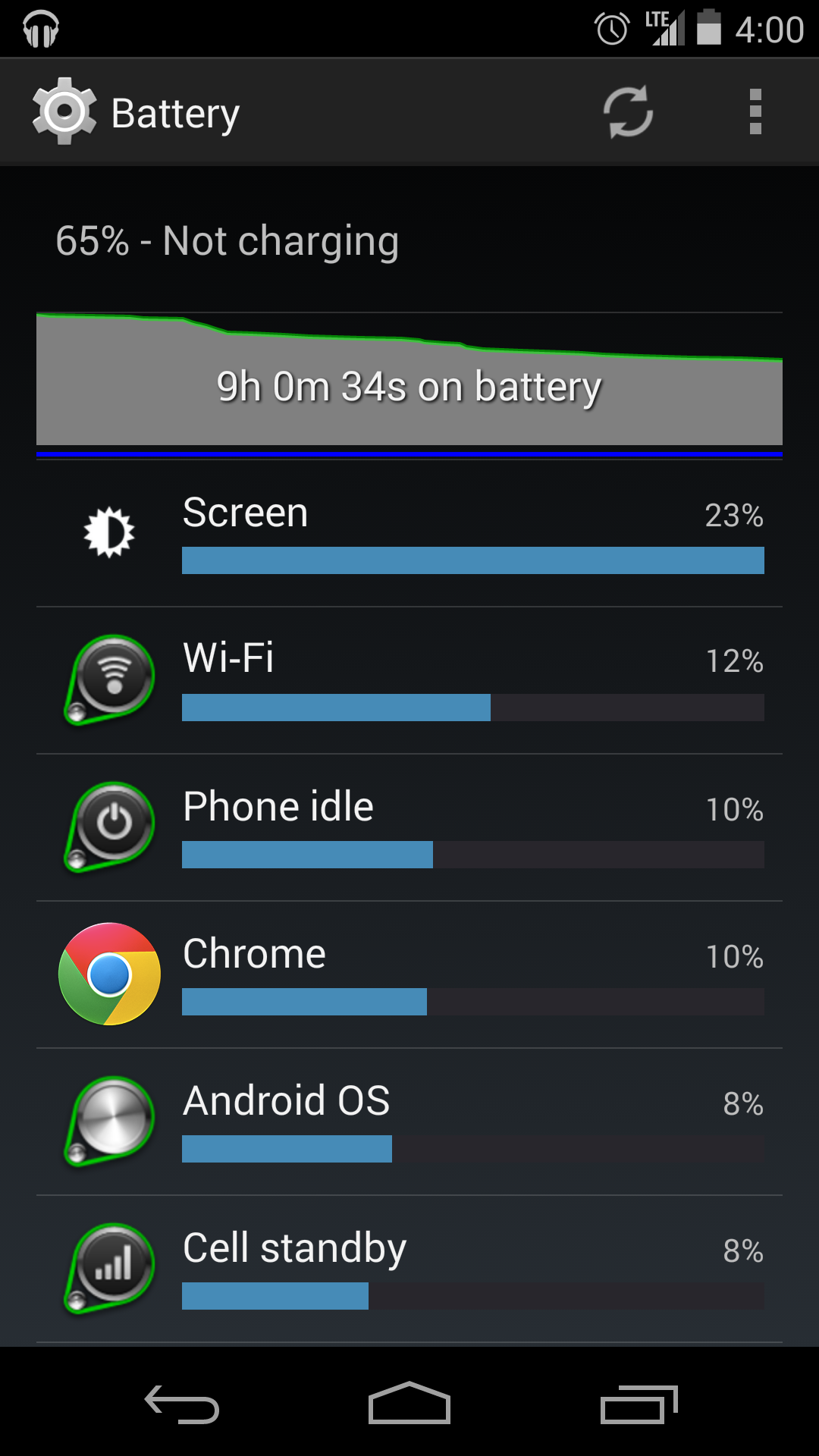 So overall experience is good. I like the fact that I can use phone for whole day without recharging. And if I have unexpected battery drain I always can find which application causes this. One of the examples I told you about where I found Wi-Fi in battery usage, when Wi-Fi was turned off. Another example, one day I found that Inrix started to drain battery even after I killed it, only soft reboot helped me. Unexpected battery drain was a huge pain for me when I used Nokia Lumia 920. I just knew that after using some of the GPS apps it is good to reboot my phone to make sure that I will not find phone dead after an hour or two (after latest GDR3 I did not see this issue much, so maybe it is gone, but I'm not sure).

This is the list of apps I use pretty often and some notes about them: 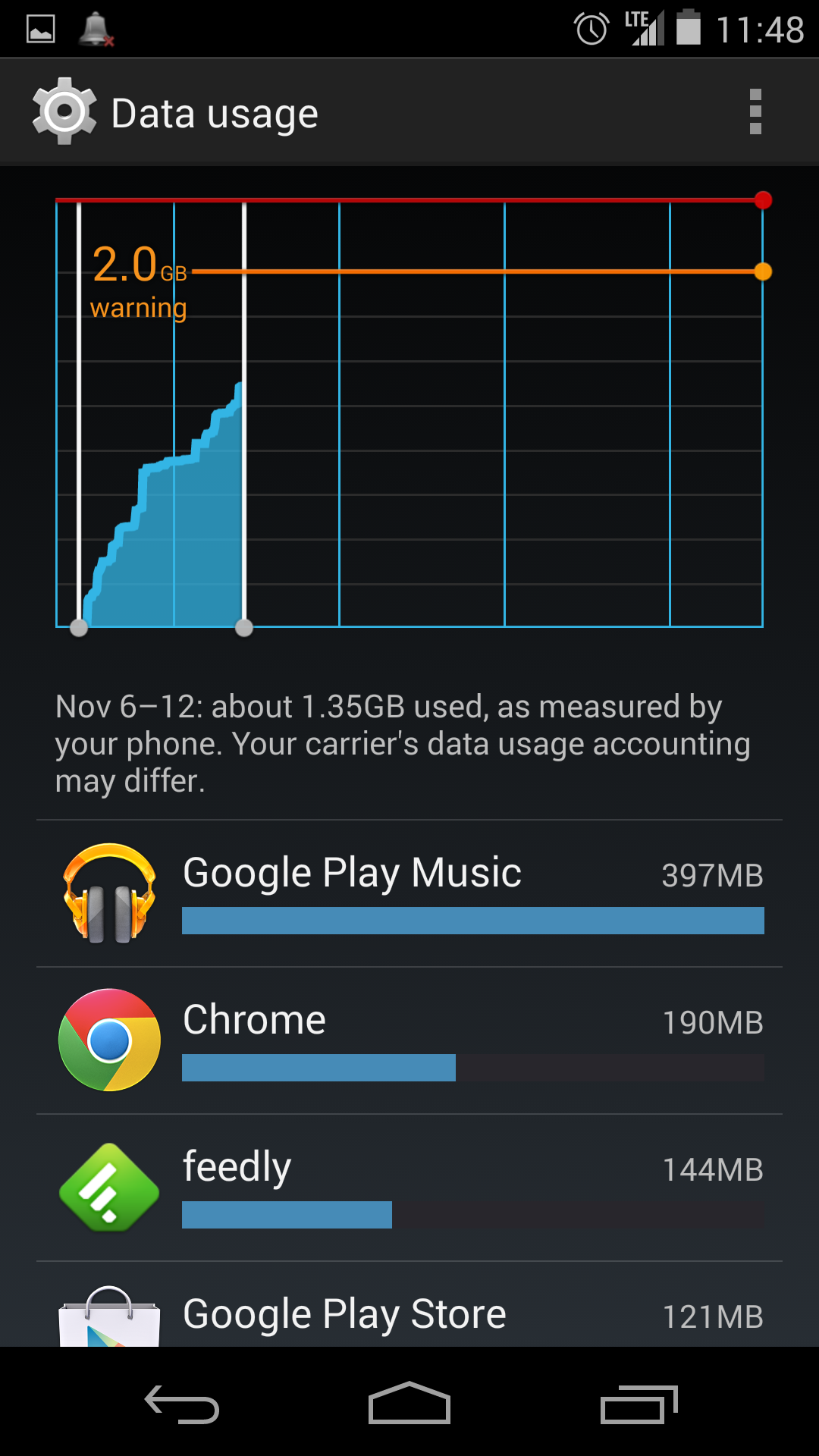 One more thing worse to mention. Frequency of application updates on Android and Windows Phone, the difference is huge. On first day of using Nexus 5 I found that official Flickr application did not work, on next day I got an update with fix.

I like Windows Phone start screen with tiles. I hate Android start screen, but I like Android shell for their features, like details about battery usage and data usage. I feel that Android connects to Wi-Fi much faster.

On Windows Phone I did not use at all Bing services for reading News or finding concerts around (app which you can find by sliding from Search screen). On Nexus I'm trying to understand what I can get from Google Now. From one side it can surprise me (in good way) by showing flight information or reminds me that I should start going to some meeting because traffic is not so good. From other side it does not show me information about how long I need to wait a bus every time I check it. So after I found that I get this information only in 50% of times - I just started to use OneBusAway again.

I feel that Nexus 5 has better response than Nokia Lumia 920 and all applications can be opened much faster, but we are talking about Nokia Lumia 920, which is one year old phone.

One thing which I found is that camera sometimes does not set location for photos (looks like it does not set when it still searching for exact location), never had this with Lumia. Some of these photos I made in HDR+ mode (you can find out by clicking on View Exif info for each photo).

And I don't feel that camera on Nokia is better. For me they are the same. Soon I will have small trip to sunny place, where I will probably make a lot of pictures with both phones, so there will be a lot to compare.

Nexus is a great phone. Screen is huge, but does not feel that way, it is also very bright. At the same it does not feel like heavy phone (especially in comparing to Nokia Lumia 920).

Very nice phone for web browsing, reading. And as a phone is good too. So I like this phone for features for which I bought it. And I will definitely keep Nokia Lumia 920 around, because of Here+ maps and Camera.

P.S. Just want to mention that I'm a geek. Changing phones once in a year for me is a requirement. I bought this phone not because Windows Phone does not give me everything I want, it is because I had Nokia Lumia 920 for a year. Contracts on AT&T are two years, so I just wanted to get something new and cheap. At the same time I'm not going to buy any new Windows Phone device in near feature, because of one reason: you can sell one year old iPhone 5 for $400, but one year old Nokia Lumia 920 costs $200.